We have also made some significant improvements to the core framework in preparation for an upcoming major version release which will allow arpReach to run with PHP 7.

And … we’ve included a new feature which has increased signups by an average of 17% over the previous two months testing while at the same time increasing the optin confirmation rate by 11%.  Plus we’ve fixed a number of old bugs.

The changelog for those in a hurry can be found here http://www.arpreach.com/changelog

A deeper look at the improvements

Probably one of the more helpful improvements for busy marketers in this release is that we’ve set the default tracking of HTML emails set to On.  (I can hear the cheers for this and I know I’m in great company when I’ve sent out my broadcast only to find out that I’d forgotten to turn on the open rate tracking when it can to checking the reports.  No more face palms for this 🙂 )

Reporting and tracking brings us very nicely in to some of the new API functions.

With so much new tech released and on the horizon, tagging, segmenting and reporting has never been more important to all business owners and marketers, not just those specializing in email.

arpReach has always had one of the most powerful engines for tagging, categorizing and segmenting your contacts in to highly targeted broadcast lists and the new API functions allow you to remotely call that power.

The new API‘s allow you to not only create and call ‘Tags’ but to also list contacts with specific tags, identify who opened which emails, clicked which links and with what Tag or Tags.  You can even set date ranges.

Some of you will already be drooling at the possibilities you’ve now got as an arpReach user.  For those wondering why this is so good let’s look at just a few things that can be done to save you time and make you more profit.

Then imagine being able to send your contact emails tailored to what extra you know about them while at the same time being able to change your re-targeting campaign so your contact see a more relevant ad based on the actions they have already taken at your site. The power these API‘s give you is huge.  Plus you can customize your reporting with more relevant data to identify what’s working and what needs improving or stopping.

How has arpReach increased signups by 17% and confirmations by 11%?

The first thing to say is that the improved results we have detailed were not what we expected.  In fact what we implemented out of ‘necessity’ we were expecting to kill our signup rate.  So why did we do something that might cripple our list building activities.

Here’s the back story.

Part of what we do for some of our clients is monitor email delivery networks and test their mailings against various commercial spam filtering services.  Like many other companies we also filter our own inbound email.  Don’t get me wrong, we’re marketers and keep in touch with all of the launches but lets face it … we all get spam .. and in a technical sense spam changes from day to day.

Given that many businesses for one reason or another use or rely on monthly paid autoresponder services, it was a massive eyebrow raising moment when I discovered back in August that the very reputable InfusionSoft had been back-listed by SpamHaus.  I need to point out it wasn’t just emails sent from InfusionSoft that were being blocked. Other monthly service providers were not making it through the blocks and spam filters either. OK, I’ll admit that I was more than a little happy that big names in the industry were blacklisted.  I’ve been saying for years that those serious about email marketing should take control of their own lists and delivery which is what arpReach allows you to do.  But …

But how the heck did these major players screw up so badly?

With so many ‘wannabe email marketers’ uploading ‘high quality lists’ to some of these services, their sender scores are not always as good as when you take control and manage things yourself.  Yes their lower sender scores do mean that lots of emails trigger some of the spam filters but an outright blacklisting by Spamhuas ….  this was a story.  It’s known as Subscription Bombing

A quick search lead me to a post by Laura Atkins “Subscription bombing, ESPs and Spamhaus” After a scratch of the surface it soon became very plain that this was Major.  But it wasn’t about spam emails as you normally think about spam.  This was nasty.  This was using spam as a weapon. More specifically this was about bots using lead capture signup forms across multiple networks to 10’s of thousands of email confirmation requests, per hour, to specific people and organisations in the private and public sector with the sole intent of inflicting damage.

The industry players pulled together quickly to try to solve the attack after Spamhaus got the markets attention by taking some drastic action  (blocking major players will do that).  And the upshot is that it became obvious that doing something to help protect our server’s reputations, our lists and the wider industry from fake and automated signups was the right thing to do.

We already use arpVerify to screen out mistyped and garbage email addresses but there was another step we could use before an email address gets checked.  Use Captcha on the sig-up form itself.

I know that pretty much every article I’ve read by marketers says that every additional action you make a user take reduces the effectiveness of your signup form and that adding a capcha kills sign-ups but that is not what our testing has shown.

We expected that adding Google reCapcha to our signup forms would reduce our signup rate but we found the exact opposite.

As a result we have included an optional setting for you to use Google reCapctha in your forms.

Why do you think including reCapcha improved our signups and optin confirmations?  Is there a perceived increase in value?  Share your thoughts in the comments.

More about our test results

We applied Google reCaptcha to the main pages of our site.
The form content has not changed throughout the test (with the exception of adding reCapture)
recapture was added to our form in October (yes it looks ugly)
Monthly unique visitors vary through out the test by an ave +/- 2%

See it in action

Without any custom styling this is what (and hopfuly still will be when you see it 😉 … we love net gremlins :/ ) a basic arpReach form with Google reCaptcha looks like. (Like we say, not the pretiest of things but you can’t complain at the results)

While you’re here sign up and try it yourself.
(Yes we’ll look after your details, there is a sequence of 7 emails and we mail out currently one a week)

(We would love to know what you think.  Share your thoughts in the comments below.)

How do you upgrade to arpReach 1.6?

We’ve provided instructions for existing licensed users of arpReach Gold or Standard here: How do I upgrade to arpReach 1.6

Where can I order arpReach 1.6? You can order arpReach 1.6 here

How do I upgrade from arpReach Standard to arpReach Gold?

You can upgrade arpreach Standard to Gold here 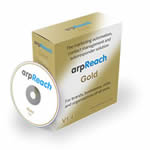